Early this year the rumor mill was in overdrive – Boyz II Men were apparently going to be touching Zambian soil, courtesy of Stanbic Bank Zambia at their annual Music Festival. A leak in Stanbic’s marketing/communications team and the news spread like Chinese whisper: everyone was talking about it, everyone had their own little version of the story, but still the skepticism was rife; after all we were ready for Sean Paul, we were ready for Sean Kingston, we were even ready for Wiz Kid that one time (you all remember how that went down). However, we had no reason to doubt Stanbic, they gave us UB40 last year and it was EPIC (read about that HERE if you missed it).

The roll out by Stanbic a few months later confirmed that Boyz II Men were indeed set to grace us with their legendary presence in September of 2017. The excitement was real! This is a group I listened to on cassette, before I even knew what any of their songs were about. Their harmonies and melodies were infectious even to a prepubescent kid (at the time) like me, listening to songs about heart break and making love, understanding non of it but vibing to it still.

My friends and I would randomly burst into song and sing some of their songs, giving our best to harmonize like them. My dad played these songs in the car when he dropped us off at school sometimes, that’s how close to home Boyz II Men hits. Like, are you even Zambian if you didn’t grow up around at least ONE Boyz II Men fan? Plus anyone that knows me knows how much I love 90’s R&B, that was an era of music that left its mark.

The Stanbic Music Festival was set for the 22nd and 23rd of September, two nights of amazing live music! Wezi, Chefy, Mumba Yachi, Abel Chungu, K’Millian, James Sakala and Caitlin De Ville were set to open for Boyz II Men –  a magical musical line up, auditory heaven. If my bank account was as  willing as my heart and my ears I would have probably attended both nights (VIP so I could be right in the front), but tickets were going at K1,500 (VIP) a piece and K500 (Standard). I stuck to my financial lane, after all last year’s UB40 concert was pretty dope even from the Standard section.

Concert day came and I was still in slight disbelief that I was getting the chance to see one of my favorite musical acts, live in living color. I had been listening to Boyz II Men all week in anticipation, I knew it would be a sing-along of epic proportion.

My best friends and I take advantage of events like this to go out as a squad and be a problem, this one was no different…it was planned well in advance. So we made our way to the Polo Club, walked in and the set up was slightly underwhelming as we figured we’d probably have to stand on our chairs to get a proper view of the stage: last year the Standard section was slightly elevated so we still got a clear view of the stage, no such luck this year.  To make things just a little bit suckier we had no screens in front of us (like last year) AND no speakers so we had second hand sound, but I guess that’s what we get for being cheapskates.

The concert was set to start at 6PM, and start at 6PM it did. Chishala Chitoshi (aka Gesh Groove) and Kamiza Chikula stepped on stage as our MCs for the night. This was such a pleasant combination as they carried the night and kept the crowd going, with brilliant banter and poetic introductions to each act. The chemistry between the two hosts was legit, I wouldn’t have thought two male hosts could keep a crowd going the way they did…not  once was I frustrated by their intermissions, even when they were plugging Stanbic services.

They introduced the first act of the night, Mr Abel Chungu Musuka. An apt opening act as came on and owned the stage with his popular ballad Ichitemwiko. Thus commenced the night’s sing along, hands in the air, crowd swaying. He went on to fire up the crowd with a few more uptempo songs, his back up band and singers raving up the energy with each song. An A-class act.

Next up was K’Millian – I knew that in my heart I could probably spew a song book of K’Millian lyrics on site, but I couldn’t for the life of me remember the titles of his songs off the top of my head. This all changed as soon as he stepped on stage, familiar tunes that had everyone nostalgic and singing along, remembering a time these songs would play everywhere. When he sang Kakabalika  and Nizakukonda I admitted to myself that I am a fan of the man. He sang with the ease and confidence of a man that knew he had cemented his place in Zambian music history. A legend.

The intermissions were not void of entertainment, as Gesh and Kamiza kept the banter coming and in between sets local DJ Sebastien Dutch kept the crowd entertained with his versatile selection of bops.

Nibbles and drinks were readily available, with food from top notch food joints like Steers, The Deli, Fishaways, Marlin. Drinks were also in abundance for revelers that were thirsty and those that preferred to experience the concert inebriated (be it slightly). And if the drinks went right through you, the way they do me, the pee breaks were bearable as the toilets were in abundance too…and clean.

No one expected what happened towards the end of his set….in tribute to the late Chester Bennington (of Linkin Park), James proceeded to play an electric guitar cover of Linkin Park’s HIT SONG Numb. Nobody expected it. We were all so caught unaware but when we found our bearings and realized what was happening, everyone was scream-singing along and not missing a single lyric. A versatile artist.

Caitlin De Ville, like James Sakala, is an artist who stole my heart for the first time at last year’s festival. I was so hyped to see what she does with her set this year and she did not disappoint!

In an elegant chitenge frock and barefoot again (which I love, there’s an authenticity to it that wins me over every time), electric violin in tow, Caitlin took us on a journey commencing with recent hits that resonated with the cool kids. From DJ Khaled’s Wild Thoughts to Ed Sheeran’s Shape of You, she had us on our feet, providing the vocals to her masterful violin instrumentals. It was even more amazing to see her cover local productions like James Sakala’s Galamukani and DJ El Mukuka’s Bottle of Loneliness.

Where she won the night for me, though, was when she took us back in time to the late 90’s and early 2000’s giving us hit after hit. From 2 Pac’s Changes and Coolio’s Gangsta’s Paradise, to Destiny’s Child’s Survivor and TLC’s Scrubs, Michael Jackson’s Black or White to then Puff  Daddy and Faith Evan’s I’ll Be Missing You, Caitlin had the crowd immensely nostalgic and singing along. This was proper preparation for all the singing along and throwbacks that were soon to come. The perfect curtain raiser.

It was finally time for BOYZ II MEN, THE MEN EVENT (See what I did there?). Nathan, Morris and Wanya hopped on stage to Motownphilly, to a screaming crowd – just as I had imagined it in my head. In my head if I ever attended  a Boyz II Men concert it would kick off with this particular song. It was an actual dream come true. These men aren’t boys anymore, and they still brought the 4-count choreography, all whilst singing. Wanya even brought the waist moves! That is performance. 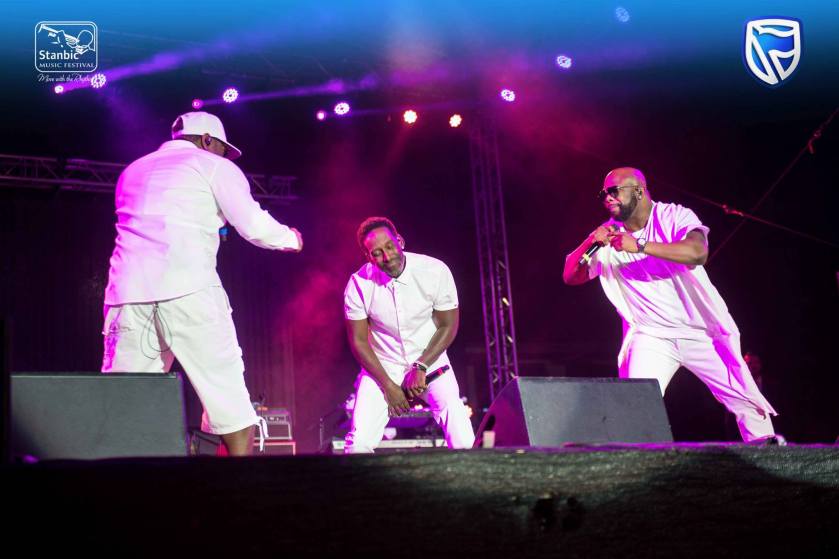 The screaming died down as we went into THE ballads: On Bended Knee and It’s So Hard To Say Goodbye To Yesterday had so many of us in our feelings, singing along word for word, it was like field karaoke except everyone knew the lyrics already…words can’t really describe how awesome.

The first few notes of each song they sang were punctuated with shrieks of joy from the audience as we realized what song it was – when they sang I’ll Make Love To You, the crowd sang every single note and hit every adlib, even they seemed in awe of how well everyone knew their stuff. They went on to do 4 Seasons of Loneliness and at this point they didn’t even need to sing, the crowd was performing for them.

They stunned us with a cover of Bruno Mars’ Locked Out Of Heaven. Of course they made it sound like their own song and left us feeling like we had just visited harmony heaven.

One Sweet Day came on and judging from the Boyz II Men social media pages, they were stunned at how well we sang the song. Vocally, we are a strong nation!

A Song For Mama had everyone pulling out their phones and sending voice notes to their mothers, as only millennials would, tears rolling down eyes, hugs all over the place. It was emotional.

As the night drew to a close they shut it down with End of the Road, apt. But I was sad because they hadn’t performed my favorite song, and just as I was ready to give up and head home they came out again to sing MY favorite song, The Color of Love. I was so overwhelmed I could hardly sing along. It was such a fulfilling experience that left me feeling like taking them home to harmonize in my kitchen as I cook.

Next year we go again!